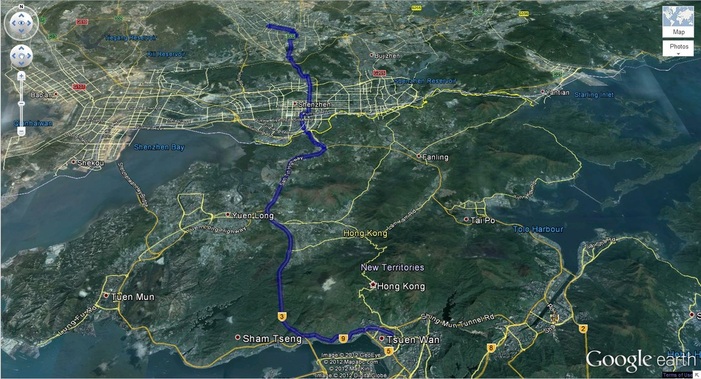 From a three room high rise office in a neighborhood of industrial skyscrapers tucked in to the side of mountains in what was once a center for Hong Kong’s manufacturing industry. This trading company orchestrates part of the global movement of goods that had become essential for our modern lives. Its owner travels a minimum of three times a week from Hong Kong to visit the factories he works with in Shenzhen. Bridging the barrier on behalf of his international customers and local suppliers.  Having worked and studied throughout Asia, he clarifies that is both sides are the same  “but the rules are different”… 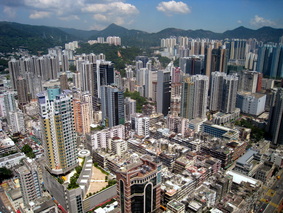 The owner of a small trading company operating out of a three room office in an industrial area of east of Kowloon. Raised in Guangdong he followed his parents to Hong Kong over ten years ago and is now marred, with small children. His business is based on exporting electronic goods from the Pearl River Delta’s factories. During the peak of the economic boom he traveled five times a week to visit suppliers on the mainland. This year as the global economy has cooled he crosses only two to three times a week. Because of his family he returns every evening to Hong Kong, and remains their because of his personal social networks and the services it offers him and his family. His Office is 30min by bus from the border, less by car and the factories he visits are only another 30 min. The border and his movement across it make his business possible. It creates the economic social and political difference which he is able to profit from... 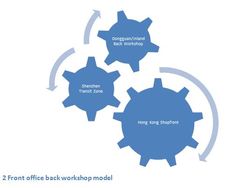 蓝 was the first informant I interviewed in the field, and it was also my first time leaving the comforts of Hong Kong’s tourist districts. Stepping off the metro into the sweltering June heat with less time to spare than I’d hoped. I was dazzled by the bright grey and crowded skyline of industrial Hong Kong. I’m usually pretty good with directions, if I plan my trip in advance, but the apartments and factories built into the steep hill piled up on top of each other to the sky, the lack of natural landmarks and a network of nondescript motorways confused me. The sheer compression of space left me thoroughly lost in this alien landscape and I arrived at 蓝’s office twenty minutes late.

On the twenty sixth floor his office consisted of four small rooms, off a corridor of another dozen just like it. The scale of things seemed off-kilter. From this office, he and three staff managed an import export business of electronics, mostly CPU’s and generic cell phones. Greeting me and introducing me to his staff, we carried out our interview in stops and starts as phones kept ringing as decisions needed to be made. A few minutes of waiting in the chaotic order of his office, as in many other similar offices I would visit over the next few months, made me comfortable with this particular style of operation that permeates both sides of the border and for all its idiosyncrasies allows me to buy an mp3 player for twenty dollars in Sydney.

蓝’s business, like that of almost all my informants, revolved around getting manufactured goods out of China, particularly from the Pearl River Delta, with the least bureaucratic resistance and cost. The heavy lifting of the manufacturing sector (making stuff), as  I was told again and again, was in the hands of the factories, often still connected to or run by village work units or local businessmen who handled the hiring, procurement, production line and most importantly the Chinese Government bureaucracy (in some cases the businessmen were also the bureaucrats). They typically operated either as Original Equipment Manufacturers (OEM) or Original Design Manufactures (ODM) and traders’ like蓝usually had relationships with both. OEM factories produced a standard range of goods, with whatever logo the customer wanted, while ODM made things according to the design and process requested by the customer. They usually received all their capital investment from a single company, usually based outside the region.

It is at this point that border comes onto the picture. The border “changes the rules.” Hong Kong today is “an information logistics and financial centre” and a duty free trade port, with relaxed immigration controls with the rest of the world and world standard business regulation and enforcement. China is its back room, full of cheaper land and labor. 蓝’s description of his business fitted neatly with what I had read about the outsourcing driving industrialization that has made China what it is today. What is not in the economics textbooks is people like蓝, skilled and educated in both systems in a way you can’t learn at university. Like his peers, he is highly skilled at negotiating goods in and out of the country through a web based more on personal relationships than formal contracts.

蓝had chosen Hong Kong as the base for his business because it offered a western model of business regulation like those he had learnt during a master’s program in Singapore. From Hong Kong he felt western models have penetrated into China as far as Shenzhen, but after that “a more social, fluid wining and dining model took over”, he said. In his few years in business he had shifted his focus from the overseas to the domestic market, capitalizing on China’s growing domestic consumption and the tax advantages his present location in Hong Kong gave him.

Walking up towards a local shopping mall for lunch, we paused at the traffic lights, and looked back down the hill across at the buildings below us. He commented on how most were almost empty. Their task as factories and workshops had been re-assigned to the mainland. They lay empty waiting to be rezoned into housing, precious living space unused, impatient perhaps for their incorporation into some government master plan to come.

Shifting the discussion away from business, I asked how his family viewed his regular travel across the border to visit factories and negotiate with suppliers (4-5 times a week during the economic boom and now 2-3 times during the recession). He stressed how it was considered normal and how his time as a university student in Guangzhou had given him a strong grasp of mainland language and culture. He chose at the request of his family to return every night to Hong Kong, where his Korean wife felt most comfortable and where his parents had settled from the mainland. In a passing comment he mentioned that the change and traveling was “hard on health.”He expressed diplomatically how “personally every person does different things” reinforcing earlier comments about how neighborhoods and families once so interconnected had drifted apart over the years of separation. As with modes of doing business, he saw Hong Kong (representing global ways) as having a major radiating impact on China, but he also questioned who at the end of the day held the balance of power over the situation.

We ended our time together discussing international, local and boarding schools and their impact on children. He was considering sending his children away to study in Canada, and that brought the discussion back to the changes that had happened in his short life time.