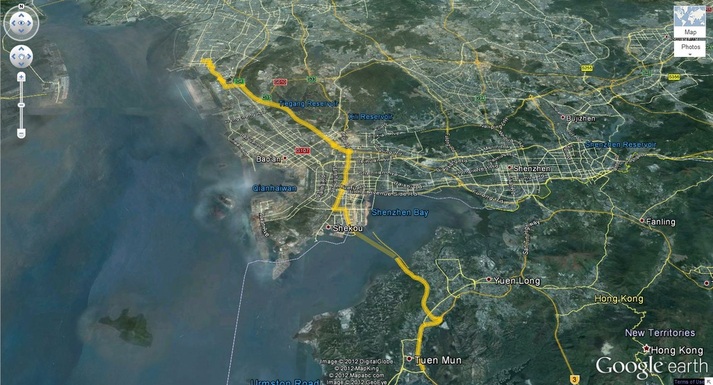 After preparing breakfast for her two boys and leaving them for their father to take to school. This production administrator’s journey to work begins with a fifteen minute bus ride through Hong Kong’s high rise suburbs across the newly opened Shenzhen Bay Bridge then through the newest of the barrier checkpoints.  The first to have the separate immigration formalities of both jurisdictions in a single brightly lit hall. She then travels by bus to Shenzhen Airport where is collected by private car and taken to her office in a dusty factory area, returning by the same route in time to prepare dinner… 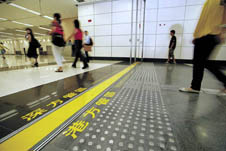 Both within and apart...  Suburban Hong Kong to Shenzhen Expansive Industrial Zone

Having grow up in south western mainland china, where she was educated and married. This daily border commuter moved with her husband to Hong Kong to be with his parents. After working for three years on Hong Kong she took her first cross border job. At that time the Shenzhen Bay bridge was not yet completed so she was only able to return home every third night. Looking again for a job in Hong Kong she applied for a job with a major fashion manufacturing outsourcing company. Intending to work for them on Hong Kong Island but when the company discovered her background they asked here to act as administrator of their mainland operations based near Shenzhen Airport. Enticed by a transport allowance and an equivalent commute time to the Hong Kong office thanks to the newly opened bridge. She relies on a Hong Kong public bus, an airport bus and car with driver to get to her workplace. Although she has rented a small private apartment nearby her office a couple of months ago as the commute can wear her down, she has yet to use it, preferring the comfort of returning home. She likes working in mainland china and enjoys the camaraderie with her young staff, many of whom have similar upbringings, but laments the time away from her family. Her family is now in Hong Kong, but her extended family and social bonds keep here close to China, regularly meeting up in Shenzhen with a group of old classmates who have also migrated to the region, so far she is the only one to have made it a step further to Hong Kong... 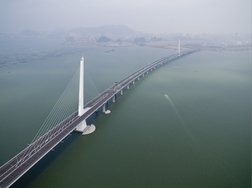 In the cool of the morning 橘红色[1] wakes with her family in her fifth floor apartment in an outer residential suburb of New Territories of the Hong Kong Semi-Autonomous Region (SAR). Five years ago when she was twenty six she moved from mainland China with her husband and started her ‘new life’ in Hong Kong. Her husband’s family arrived earlier and now live on another floor in the same building. After preparing breakfast for her two boys and leaving them for their father to take to primary school. At seven-fifty she heads downstairs, to take the first segment of her regular but remarkable journey to work. In a new white, clean and air-conditioned public coach she heads out through Yuen Long Valley. The bus rolls past  old factories and small stocky aging apartment blocks, with a light spattering of luxury homes still waking up to the morning cool.

Entering a smooth new highway, the bus merges with fleets of trucks for the journey across the newly opened Shenzhen Bay Bridge, a poignant symbol of the reintegration of Hong Kong into the motherland. Fifteen minutes after boarding the bus she arrives at the newly opened immigration building, housed in what could pass for an airport terminal. She proceeds through the sliding doors, scans her Hong Kong ID card and enters a chamber where she scans her fingerprint. In a split second her body and document are matched to the database, and she is cleared to leave Hong Kong. Then it is a 100 meter dash, through a kind of intra building, intra-country no-man’s land, before using another card to repeat the process and be certified to enter China.

Leaving the terminal by the globally ubiquitous  electric sliding door, she enters what at first sight appears to be a new gateway in a different ‘system.’ In another hundred meters the change is more obvious as she queues for the airport express bus (there is a regular bus that cost much less but it takes twice as long with poorer air-conditioning), before it pulls  out into a dusty sea of construction cranes, high rise luxury apartments and rundown communist era low rise apartment blocks. Forty minutes later, via a new highway, she arrives at yet another terminal, the Shenzhen International Airport. Disembarking with the airline passengers, she calls a driver from a local chauffeur car company to take her the final five minutes, to her office. The area where her office is too new and too industrial to be serviced by public transport – down the side streets the road surfacing crew is still trying to catch up with the construction. In the evening she takes the journey in reverse.

橘红色 was born and educated in South Western China, and after arriving in Hong Kong she spent her  first three years working around Hong Kong island. In 2007 she started her cross border career working in the Shenzhen office of a Hong Kong trading company. At that time the bridge had yet to open and she was only able to return home every third night. While she enjoyed the freedom to socialize with her workmates in Shenzhen it put some strain on her family and after a year she resigned.

Looking again for a job in Hong Kong, she applied for work as a merchandiser for a medium sized trading firm at their Hong Kong Island office, a sixty minute trip from her home. Looking at her skills and experience, she was offered the job as administrative officer at their Baoan (an industrial area to the north of Shenzhen) office. Convinced by an allowance for travel expenses and being able to return home every day, she took the job. She now oversees an office of around twenty people, including sales, pattern and sample making along with supply chain management/logistics. From a humble rented office they manage the outsourced production of some of the world’s premium fashion labels.

橘红色 likes working in Shenzhen, though the travel gets to her. She shares an educational and social background with most of her staff, university educated migrants from South Western China. She remarks that ‘Hong Kong people don’t really trust Chinese people’ but then has to place herself as Chinese who is trusted and paid differently because she lives in Hong Kong. She still meets regularly with a small group of university class mates, who also migrated to Shenzhen, though she is the only one to make the final move to Hong Kong.

A few months ago she rented a small apartment near her Shenzhen workplace but has yet to bring herself to sleep there, feeling the pull of her family even after a long day. Despite the clear advantages to living in Hong Kong, she purchased a house, close to Guangzhou, where she prefers to spend her holidays. She looked at moving her family to the other side of the bridge in Shekou (蛇口), historically an expat enclave for oil workers but found property prices no different to Hong Kong for apartments comparable to her own.

Each day as she travels across the border it empowers her, positioning her as a manager and expatriate in her own country of birth. It is where she meets up for drinks with old friends, but with the checkpoint at the bridge closing at midnight, sometimes she becomes like Cinderella, stuck travelling large distances out of her way to the only twenty-four hour checkpoint. As I left my meeting with her at her office, she joined me on the ride back to the airport as a typhoon warning was announced and she was scared the bridge would be closed and she wouldn’t be home in time to make dinner.

[1] Please note that all participants have been disguised in respect of their wishes: a code using colors in Chinese characters has been used and some details changed to insure anonymity.