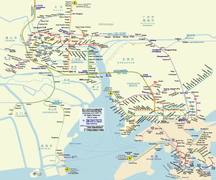 Pearl River Delta integrated metro map
The Real River Delta region has been a site of global trade for hundreds of years. At the head of the delta is the ancient city of Guangzhou, at its center are the sites of the original enclaves for Europe traders in the 16th Century. On the two sides of the mouth of the subtropical delta are the former treaty ports turned colonial territories now Semi Autonomous Regions of Hong Kong and Macau. These enclaves though now technically part of a unified Peoples Republic China are separated from it by high fences and razor wire. After returning to the PRC they maintained their, currencies, courts and immigration departments. Citizens of the People's Republic of China require a permit to travel to these Semi Autonomous regions and permits are required for residents of the Semi Autonomous regions to cross the border in most cases. The barrier remains and all who cross are subject to similar regulations and formalities as those who arrive at the regions airports and occur twice (to exit one jurisdiction then enter the other) each time you cross.
Despite this each day tens of thousands of people from, school children to millionaire businessmen cross the barrier, for work or leisure. A considerable number do so daily, there workplaces or school on different sides to there homes and families. A complex system of regulations and documentation control, who can cross and how often. Most frequent travelers cross using smart-cards and their finger prints. Customs regulations control the moment of certain good and crossing by private car is severely restricted with most crossing occurring at the meeting of subway systems.
The region is a economic powerhouse synonymous with the manufacturing of goods for export. There is a very good chance that you are wearing or carrying something from this region, most likely your jeans and your mobile phone. We all have some relationship with it and its contradiction are fundamental to our modern consumer society.

Shamian Island (Canton) c. 1859
1600's Portuguese Arrive in the region followed by other European Nations
1830 - 1842 First Opium War
1842 Treaty of Nanking Signed between European Powers and Qing Dynasty, Official treaty ports start to open along eastern cost of what is now known as China
1872 - 1894 First wave of industrial growth in Hong Kong
1898 New Territories leased to Britain under the second treaty of Peking (creating current boundary of Hong Kong)
1911 October revolutions leads to the end of Imperial Rule form Beijing
1938 Japanese take over Guangzhou, set up government in Nanjing
1941 - 1945 Japanese seize and control of Hong Kong, during this period a large portion of the population of Hong Kong return to Mainland China, some are forced others do so because of sever food shortages in Hong Kong
1945 When Japan Surrenders Hong Kong is returned to Britain according to the boundaries of the treaties signed during the Qing Dynasty
October1949 the Communist Republic established under Mao Zedong following a protracted civil war

Shenzhen River Source: flicker/dcmaster
May 1949 Hong Kong Border sealed by the Communist Government prevent refugees escaping to Hong Kong, prior to this time the border had been un-fenced and guarded only from a customs perspective.
1949-1989 During this period there was limited cross border mobility though millions of refuges fled from the Mainland to Hong Kong. The farmers on the Mainland side of the border continued to sell their produce to Hong Kong. Throughout this period and Hong Kong played an important role in overcoming sanctions placed on the Communist Government during this period. Hong Kong initially struggles with food and water shortages but by the end of this period had developed a large manufacturing economy primary due to the supply of cheap refugee labor.
1976 Mao Zedong Dies
1978 First Foreign tourists allowed to cross following the cultural revolution which began in 1966

Opening Up & Shenzhen as Instant City 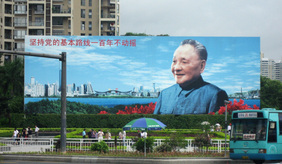 Deng Xiaoping Memorial Billord (2007) Wikimedia
1979 Deng Xiaoping comes to power, and signals a change in economic policy and reform, Shenzhen's population is .3 Million People, primarily agricultural workers.
1980 The Open Door Policy Establishes four Special Economic Zones in Guangdong
1982 Shenzhen Special Economic Zone formally opened, the zone is separated from the rest of china by a fence and checkpoints a permit is required to live in the Zone, the fence is known locally as 'the second line' and while now defunct many of its structures remain. Shenzhen's population .9 Million
1989 Law of transfer of Land Rights in Shenzhen allocates one hectare of land to each household prompting massive property speculation.
1990 Shenzhen Population 1.68 Million 1991 Shenzhen Population 2.27 Million
July 1st 1997 Hong Kong sovereignty transferred to Beijing met my large street protests in Hong Kong, Hong Kong is guaranteed the status quo by Beijing for 50 years and allowed to maintain the its own immigration legislation and border enforcement agencies.
1999 the partially elected Legislative Council of Hong Kong votes to seek Beijing's help in restricting the influx of mainland immigrants to no more than 200,000 per year
2003 Individual Visitors Scheme established to allow Mainland Residents from certain regions access to Hong Kong without joining a tour.
2004 Honggang Checkpoint commenced 24 hour operation
2007 Second crossing opened between the Hong Kong and Shenzhen urban rail systems'
2009 Population of Shenzhen 7-12 million depending on method weather counting included unregistered migrant residents, Mainland residents from major cities able to apply for multiple entry permits to Hong Kong

Electronics Plant (Wikicommons)
The Pearl River Delta is an essential part of the global manufacturing process. The Shenzhen Special Economic Zone was originally established as an experiment in capitalism, isolated from the main population. Of all the Special Economic Zones established it has been the most successful primarily due to is proximity to Hong Kong. Taking advantage of old family networks and shared language Hong Kong entrepreneurs were able to take advantage of a perfect storm of factors; established global markets and business skills developed during Hong Kong manufacturing skills and the low price of land, labor and raw materials as well as relaxed or no existent regulation to develop globally competitive factories.
While the foundation of this development is a relativity simple economic equitation it is also the product of more nuanced circumstances effected both locally and globally. The barrier with Hong Kong and the pioneer capitalists primarily from the global Chinese diaspora played a critical role in what was and to a large extent still is a very unregulated environment where personal connection was critical and corruption was rife. Hong Kong's History as a British Colony had established robust business regulation and impartial courts as well as comfortable environment for international visitors allowing it to take on a Front Office role to Shenzhen's Back office production facilities. As you will see from the stories collected for this project the barrier, enables the creation of profitable connections, that are fundamental to our current consumption based societies. 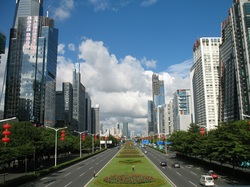 Futian Shenzhen (Wikicommons)
More than ten years after the hand over of sovereignty the border remains a powerful force in the daily lives of residents of both Hong Kong and Shenzhen. As the economic development and improvements in income continue to improve on the mainland, particularly Shenzhen which has the highest minimum wage in mainland China. Many of the income and const differentials begin to even out if not invert changing the economic cross border pull. This could suggest an end or reduction in the border, part of a central desire for greater integration.

Despite a continual increase in cross border mobility and a more balanced if not reversed economic situation the political and ideological trajectories of the two jurisdictions are still a barrier. Hong Kong is a popular site of decent, the annual commemorations of events on June 4th in Beijing and the hand over of sovereignty on July 1st continue to bring thousands of people out onto the streets. Interesting when I have attended both these events a constant message from the organizers was 'this is the only place on Chinese soil we can do this'. The Shenzhen barrier not only represents a barrier to people and goods, it also functions as a barrier to ideas. The internet in Hong Kong is uncensored and the local press though often sensational free to publish what they believe there readers want to read. In Shenzhen and throughout mainland China access to information is restricted and censored. What makes the front page in Hong Kong is very different to what makes the front page in Shenzhen. The Hong Kong's is often positioned as a relief valve, as you exit into the railway station on the Hong Kong side of LuoHu you are confronted with a large table stacked with newspapers unavailable in the Shenzhen, and residents in the Shenzhen apartment blocks overlooking the border can receive uncensored internet via the towers in Hong Kong on their smartphones.
The things that make Hong Kong special within the Chinese state, uncensored media and individual economic rights supported by impartial courts, and the right to assembly and association currently insure the barriers survival while constantly being a target of those who would like to see greater integration, the question raised daily in the Hong Kong media is on whose terms and standards should this integration occur.